A dazzling production of the enchanting show, The Nutcracker On Ice, has opened for the festive season at the brand new International Convention Centre Wales (ICC Wales) theatre.

Following sold out seasons at the Royal Albert Hall and the London Palladium, award-winning international troupe, The Imperial Ice Stars, wowed the audience on opening night, Wednesday 11th December, to begin a run of 35 performances of the spectacular ice show.

Set against a backdrop of colourful projections, opulent costumes, magic tricks and special effects, the 23-strong cast of World, European and National Championship-level skaters dance to Tchaikovsky’s glorious score on a frozen stage at the 1,500-seat tiered theatre.

Tony Mercer said: “It’s a privilege and an honour to be the first company to perform on this ICC Wales stage. To be invited to bring The Nutcracker On Ice to this amazing new venue for the Christmas period is something very special and I think it’s the perfect show to launch this new theatre. Christmas is a time for family and for sharing and for being together and this show has something for everyone – whether you are six or 106! It’s a great way to promote the spirit of the season.”

Tickets are still available for evening and matinee performances of The Nutcracker On Ice, taking place almost every day until Sunday 5th January. Showcasing world-class skating with sumptuous projected scenery, lavish costumes, ingenious tricks, spectacular flying sequences and agile acrobatics, The Nutcracker on Ice is a thrilling theatrical experience and a festive treat that will enchant all ages.

To create the stage, eight miles of pipe-work chilled to minus 15 degrees are laid out on stage, 12 tonnes of crushed ice spread over the surface, and 10,000 litres of water sprayed over a period of 24 hours; while the auditorium is kept at a comfortable temperature.

The production has been choreographed to incorporate state-of-the-art projection, including some stunning LED illuminated effects as well as spectacular flying sequences. Sumptuous costumes have been designed by Elena Predvodeteleva, a renowned designer of costumes for theatre, film and circus as well as couture.

This is the first entertainment event to be staged at ICC Wales, which is part of an £83.7m joint venture between the Welsh Government and the Celtic Manor Resort. The Nutcracker on Ice is running until 5th January 2020. 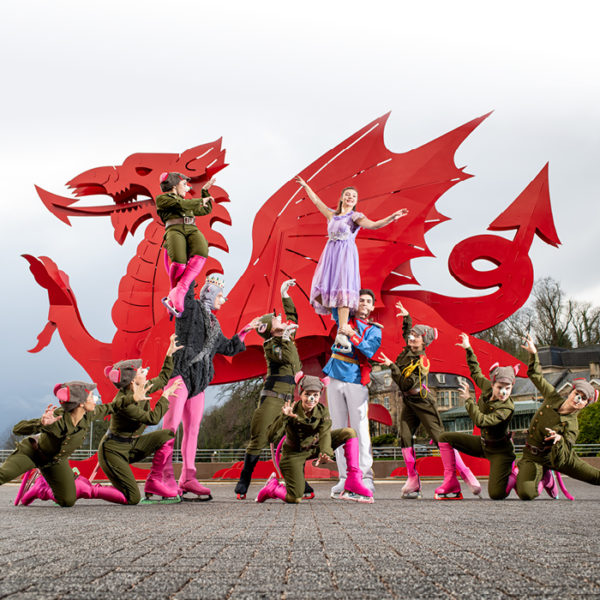