The Celtic Manor Resort and International Convention Centre Wales have teamed up with The Salvation Army and other charities to provide a nourishing festive treat for the homeless and vulnerable people in need in South Wales.

Leading up to Christmas, a team of eight chefs from the Celtic Collection venues will have prepared more than 900 turkey dinners and vegetarian alternatives for serving at charity centres and delivering to vulnerable people in need.

The first batch of 320 individually portioned frozen meals was collected from ICC Wales head chef Gavin McDonagh by The Salvation Army in Cardiff, and will be delivered on Christmas Eve, along with a wrapped present and a Christmas card, to people who would otherwise be without a Christmas dinner.

Further donations are being collected from the Celtic Manor Resort to support the Christmas charity work of Newport’s Stow Park Community Centre, Pobl, Eden Gate and The Salvation Army in Newport.

Celtic Manor Resort and ICC Wales Culinary Director Peter Fuchs said: “The Salvation Army and partner charities do incredible work to support the vulnerable people in our community and we were delighted to be able to support their activity once again this Christmas. We were pleased that this year we were able to adapt some of the food we prepared so that we could create individual meals for those unable to attend a centre under the present health restrictions.

“We serve thousands of Christmas dinners every year at Celtic Manor and ICC Wales to those joining us for parties and family celebrations, but none give our teams greater pleasure than making these contributions to those in need within our community.” 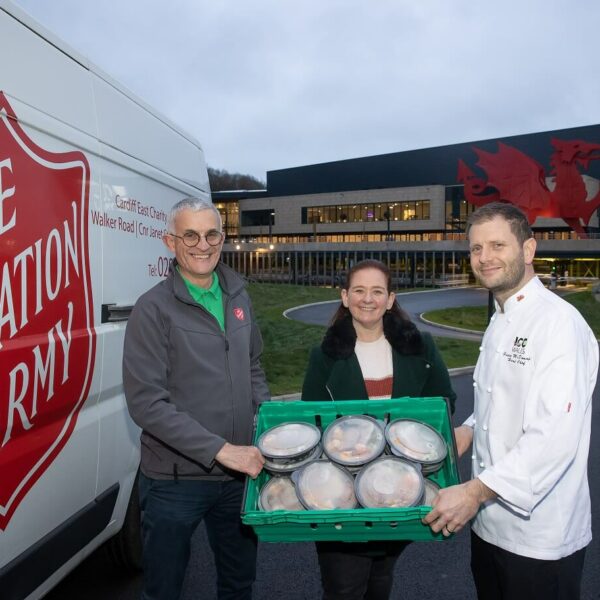